Iran and Escalation, by André Bandeira

The European Union has offered a package of “sweeteners” to Iran, so that this latter complies with the AEIA injunctions and the UN resolutions, in a word: suspending Uranium enrichment. But does the European Union have a second chance in this diplomatic imbroglio, which began in Paris, in 2003?

It is useful to retain three relevant historical facts: first, the Cold War began in the Northwest of Iran, in 1946, when a Democratic Republic of Azerbaijan, with the support of the Red Army and the conspicuous presence of a powerful soviet General Consulate was proclaimed; second, between 1978 and 1979, it was the first time in the US History that one of its most powerful Diplomatic Representations has been thrashed by the hostagetaking, as never before, of so many American civil servants abroad; third, Persia was the sole Empire of the Antiquity that was conquered or dismantled by the western Powers, and it was the first temporal power to send Christian missionaries to China.

On both sides of the Atlantic, those who still feel inspired by the irrationalism of the Strategist Clausewitz, would say that Diplomacy is the continuation of War by other means, whereas War is just one among other stages of international Politics. Furthermore, those who erected the Principle of Pre-emption, and are now looking for practical criteria for its use, will sooner or later manufacture the reasons that justify a pre-emptive attack. Therefore, do not be surprised in seeing an escalation of Diplomatic devices, even the atomic one, as if the Diplomat was dancing to a military drum.

On the 21st of March, British P-M Blair defended his “interventionist policy” and added that it “would be a mistake to do nothing about Iran’s nuclear programme”. On the 23rd, Supreme Leader Khamenei, offered direct negotiations Teheran/Washington about Iraq ( after a similar statement was made by the long-time Chief negotiator in the AIEA, Ali-Larijani). Germany subscribed a similar proposal on the 5th of April. On the 28th, AIEA Director, El Baradei, meant that Iran would resume its uranium enrichment program in a few days. On the 29th of March, the Security Council gave 30 days to Iran for suspending the uranium enrichment process, which had been resumed soon before. On the 30th, the five veto-holders and the European Union tried, in order to materialize the Declaration, albeit without success, to unite for a wave of sanctions against Iran. Nevertheless, in Geneva, MFA Mottaki declared that three years of negotiations “added to our mistrust”, and, both from Vienna and New York, Teheran’s representatives said the uranium enrichment was irreversible - Iran, which is “allergic to pressures and intimidations”, would never renounce its “inherent right”. On the 31st, the Armed Forces of Iran begun to drill against “any threat”, in the “Great Prophet” exercises. On the 2nd of April, Condi Rice said that “Iran is not Iraq” (MFA, Jack Straw would say the same on the 27th of April, while ruling out the threat of military action, but Blair said, however, that it was not the time to send a message of weakness” - AP 19.04.06). This happened the same day that Iran announced having successfully tested a underwater missile, the Kowsar, able to evade radars. On the 10th of April, the Washington Post said that the Pentagon was studying the options of striking Iranian targets such as the nuclear facilities of Natanz and Ispahan, but Iranian Minister of Defence, Najjaf, while visiting Baku, on the 20th of April, said that the US has been threatening Iran for 27 years”( Reuters, 20.04.06). On the 12th of April (AFP) the newspapers, reformist and conservative alike, in Teheran, announced that Iran had joined the “atomic club”.

On the 25th of April, Al-Larijani said Teheran would suspend its relations with the AIEA, in case it had to suffer sanctions (AFP), President Ahmedinejad said that he was thinking in Teheran leaving the Non-Proliferation Treaty (AP, 07.05.06), or the Supreme Leader Khameni that if the USA invaded Iran (...) their interests around the world would be harmed” (AP, 26.04.06) but it was the military, such as Gen. Safavi, commander-in-chief of the Revolutionary Guards (Reuters, 5.04) and Gen. Firouzabadi (ISNA 12.04) who respectively argued for the right of Iran being recognized as a “regional Power” and for the survivability of Iran's nuclear know-how after any kind of attack. We should take note that it is the Politicians who are using the ambiguity of Diplomacy and the military who are asserting the rhetoric of Iranian geopolitical interests. The threat of attacking Israel as the first consequence of an US attack on Iran, voiced by the Revolutionary Guards, was dismissed by the top-military (Reuters, 04.05.06). On the 28th of April, Iran didn’t comply, after all, with the UN Resolution but the AEIA sent a report which didn’t recommend sanctions.

We know that China, France, Germany and Russia ( Gen. Baluyevsky, in Paris, AFP, 16.05.06) are against a military strike, which remains an option in the US posture. As a matter of fact, this latter is always looming, even when Pr. Bush, during a speech to the Paul H. Nitze School, stressed that “prevention”, in the case of Iran, means “Diplomacy” ( AP 11.04.06), not to mention all the appeasing statements made by Condi Rice.

On the 8th of May, the European Union offered Iran, a sophisticated Reactor but the Iranians refused it anyway, by means of the statement of MFA spokesperson Assefi ( AFP, 16.05.06), to fulfill the pre-requisite of suspending Uranium enrichment.

Then, the USA reiterated by the State Department spokespersons, Ereli and McCormack, respectively on the 11th, and, on the 26th of April, that Teheran had channels of direct communication with Washington (Reuters and AP, respectively the 12.04.06 and 27.04.06). However, when it came the time of Ahmadinejad’s letter, on the 8th of May, proposing “new solutions” to the differences between the two countries, it was dismissed by Condi Rice as not “addressing the issues” ( AP, 09.05.06).

The Defense Intelligence in the USA goes on unveiling clues and striking evidences of an Iranian nuclear Weapons program, as it was the recent case of an Iranian scientist’s laptop containing the drawings of a nuclear missile and the shaft for a concluding experiment. Nevertheless, Washington continues to dismiss the Iranian capability to line up all the centrifuges necessary to enrich uranium up to a weapons-grade level. The same discourse around a “bomb in two years or so” has been there for over a decade. On the other hand, the lethality and veracity attached to the declarations made by Iranian top-leaders is kept boiling up. It seems as if the widening and shortening of prognostics serve a political frame where History has no time, as, once Kosyguine said.

While Blair keeps a more doctrinal and daring rhetoric, one cannot deny that his days as Prime-Minister may well be numbered. On the opposite way, the more appeasing line of the French government may undergo the same fate, giving room to a more American-aligned policy, in Paris, led by Sarkozy, the Interior Minister who keeps benefiting, after all, of all political scandals around his name.

The Strategy of defining a “Clash of Civilizations” didn’t lost its way: the purpose was to define a centre of Gravity in the Adversary and that was Teheran, the “most important challenge” profiled by the US National Security Defense of 2006. And if this is the way, the ways of this Strategy are keeping Teheran in a Defensive posture, under the Damocles sword of a set of options which include “nuclear pre-emption”. While the divisions among the different segments of Teheran’s elites begin to cleave, they try their own chances of competing among themselves, in order to take the initiative and get out of the defensive closet. The EU, which has to square all the close-ins and estrangements between two old acquaintances, Teheran and Washington, shall manage the diplomatic agenda but won´t set it.

The most curious sign of the latest developments which tend to keep a more long-standing agenda out of the anti-war public sight is the fact that, by all means, the USA is engaging with Teheran, and Teheran is breaking its diplomatic isolation. That is why Donald Rumsfeld, an old conservative who has never been a neo-con, declared on the 25th of April, to an internal TV network in the Pentagon, that the USA should “contain” Teheran by means of holding on in Afghanistan and Iraq. Containment was only abandoned during the Cold War, when this latter became inevitable.

In the meantime, Iran is acting both undercover and overtly, be it in Lebanon, Pakistan, and Gaza. Better say instead of “Iran is not Iraq”: Iraq is becoming similar to Iran.
Posted by mch at 10:47 AM 2 comments: 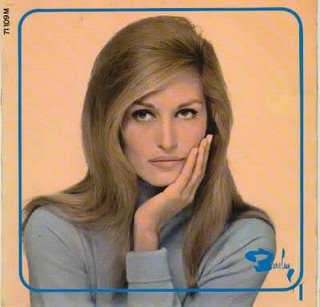 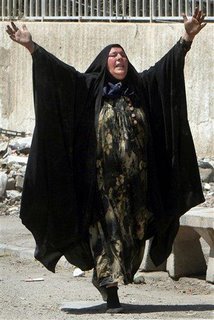