Kuwait May Abandon Dollar Peg to Protect its Economy

Jan. 24 (Bloomberg) -- Kuwait, the third-largest Arab oil producer, may abandon the dinar's peg against the dollar in favor of a basket of currencies to help minimize economic harm after the dollar declined.

``We might go to a basket for an interim period,'' Bader al- Humaidhi, Kuwait's finance minister, told reporters today at the World Economic Forum in Davos, Switzerland. ``The dollar fell a lot against the euro last year, but if we'd been linked to a basket we wouldn't have suffered'' as much.

Al-Humaidhi declined to comment on which currencies might be in the basket. A switch from the dollar is being studied by Kuwait's central bank, he said. The Kuwaiti dinar rose to 0.28915 against the dollar as of 4 p.m. in London, from 0.28920 yesterday, according to Bloomberg data.

Dollar reserves are being replaced with euros by oil producers, including the United Arab Emirates and Venezuela. China, which has the world's largest foreign-exchange reserves, and Indonesia say they plan to increase euro reserves and Iran says it's boosting oil sales priced in euros. Do meu colega WAis Ilya Platov recebi o seguinte:
The new Russian military doctrine presented on January 20th 2007 by General Gareev. The purpose of the new doctrine, elaborated under the auspices of the Russian General Staff and under the supervision of the President's Security Council, is to supersede the already existing "new" doctrine presented in 2000. What justifies such a change seven years later? Two issues are of interest: a) the definition of the most important threats to Russia from the outside, and b) military reform. The latter issue will be of a particular concern for Russian society, where the current draft system inherited from the USSR is considered to be corrupt, ineffective, and threatening to the lives of new recruits.

General Gareev justified the necessity for a new doctrine by announcing significant shifts in the "geopolitical and military-political sphere." He stated that some points of the previous doctrine are outdated and do not reflect Russia's new geopolitical situation. From an international relations standpoint, the fact of a new doctrine is part of a more general trend towards a "clarification" of Russia's positioning on the global arena. Priorities are much more clearly defined, as well as its main priorities and targets.

1) About the exact nature of "menaces," the doctrine is purposefully vague. Gen. Gareev made reference not only to direct military threats, but also to "covert" political, military and economic "threats," putting on the same level the collapse of the USSR and Yugoslavia, and recent "revolutions" in Georgia, Ukraine, and Kyrgyzstan, sponsored according to him by NATO and the US. Russia clearly wants to send an unambiguous message to the West to stay out of the "Near Abroad," considered as the main geopolitical priority, hence the necessity to keep a large army capable to protect an extended border.

2) At the same time, Gen. Gareev considers that the future war will be a "partisan" war, and not a "global conflict" with a great power. Internal security threats ("terrorism and separatism"), an avowed priority, are directly linked to the situation in the former Soviet republics. While their relative autonomy in the foreign policy domain is tolerated, any attempt to go to the "enemy side" provokes a very harsh reaction (i.e. deployment of NATO troops in Crimea, Georgia, etc.).

3) Concerning nuclear power, Russia needs to continue to develop its nuclear arsenal, as the possibility of global conflict is not excluded (NATO? China?). "Wars of the future will necessitate conventional, high-precision weapons, under a permanently maintained threat of using nuclear weapons."

The doctrine is pragmatic in inspiration: it discards "ideological issues" in favour of a 19th century-style realpolitik (this is my own impression). The NATO and US are not considered as ideological rivals, but competitors with whom it is possible to cooperate in selected fields (like anti-terrorism).

Perhaps the most interesting point is a renewed emphasis on energy issues, considered to be the main source of coming global conflicts in the next 10-15 years (very likely according to Gareev). Russia's main strength seems to be its energy resources. He pointed to the USA as the main source of such a threat, using Iraq as an example of a predatory quest for energy resources; he also mentioned the likelihood of "political and economic rivalries" arising from this competition. The general restated Russia's commitment to multilateralism, and estimated that the "USA is no longer able to carry the burden of global leadership," and that Russia is called to play the role of "geopolitical referee".

Concerning the much-needed reform of the Russian military, the doctrine states the following:

1) An assessment of the "critical" situation of the current system of obligatory military service: "the army […] is incapable of supplying young military men".

2) The new doctrine does not intend to eliminate obligatory military service, but to create a mixed system with a professional core supplemented by a draft army. The obligatory military service will be reduced from 2 to 1 year, and eventually to 6-8 months. While this does not solve Russia's problems, it will certainly reduce casualties due to mistreatment (usually carried on by second-year servicemen on the new recruits). According to Gen. Gareev estimates, the new system will be put in place within 5-6 years.

It is difficult to appreciate at this moment the reaction of the Russian public to the new doctrine. Media close to Putin underplay the "hostile" element of the doctrine, stressing that US and Russia are "partners" in the war against terror. The main concern will however be the issues of the reform of the military. Some observers consider that the doctrine advanced by Gareev artificially boosts the importance of "global threats" in order to justify the maintenance of a large Soviet-style army.

With 800 CEOs, two dozen heads of state, and topics ranging from global poverty to Web 2.0, Davos is impossible to describe. Like the blind men touching the elephant, each participant feels a different part of the beast. My favorite touch for the day went as follows: In a plenary session on terrorism, I asked David Cameron, head of Britain's Conservative Party, whether he agreed with the British Foreign Office position that the term "war on terrorism" was counterproductive because it reinforced the Al Qaeda narrative of being engaged in a holy war. He agreed, and said it would be better to call it a "struggle." Secretary of Homeland Security Michael Chertoff basically ducked the question. (Not long ago, the US State Department had tried to get the White House to stop using the term, but the move was vetoed by President Bush.) Pakistan Prime Minister Shaukat Aziz said not to worry about words because the root causes of terrorism were local deprivation (read: more aid to Pakistan). Gijs de Vries, Counter Terrorism Coordinator for the Council of the European Union, replied that the term "war" not only helped terrorist to recruit, but also led us to justify violating the rights and freedoms that provide the soft power we need to prevail in this struggle. Clearly, where people stood on this question depended on where they sat. Painting of the Amsterdam Esnoga — considered the mother synagogue by the Spanish and Portuguese Jews — by Emanuel de Witte (ab. 1680). The Esnoga in the city of Amsterdam is the oldest continually functioning Sephardic synagogue in the world. It was founded by ex Maranos (Portuguese) Jews in 1675.Ver ARTIGO A partir de hoje, 18 de Janeiro, Sérgio Veludo no Guerra Peninsular
Posted by mch at 12:20 AM No comments: It is worth.... by David Krieger It is worth contemplating that the man who told the American people and
their Congress that Iraq had weapons of mass destruction necessitating
war, who took us to war illegally, who has branded innocent men as
"enemy combatants" and held them illegally at Guantanamo, who is
responsible for torture at Abu Ghraib prison, who authorized the
rendition of suspects so they could be tortured in other countries,
whose war in Iraq has led to over 3,000 American deaths, more than
occurred on 9/11, and hundreds of thousands of Iraqi deaths, who has
stretched our military so thin it may be unable to protect the country
in the case of a real crisis, who always asserted he took orders from
his commanders "on the ground" and then fired the commanders who gave
him advice he didn't want to hear, who now offers us "the surge" as a
last desperate attempt to save his own reputation at the expense of
American soldiers, is the same man who has his finger on the nuclear
button, believes in preemptive war and has warned that all options are
on the table, including the nuclear option.
Posted by mch at 12:53 AM No comments: Officials taunted Saddam on the gallows. After he falls through the trap, abruptly cut off in his recitation of the Muslim profession of faith, someone in the room cries "The tyrant has fallen!" and the film shows the 69-year-old former strongman swinging on the rope, his eyes open and his neck twisted at a 90-degree angle to his right.

WARNING Some viewers may find the video disturbing. It should only be watched by a mature audience. 12/30/06 Runtime 3 Minutes 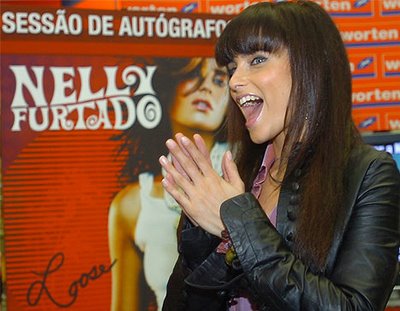